Happy 20th to HotWired, the Banner Ad, and the Other “First Digital Ad”

[20 Years Ago, Part 6. Other options: prior post or start at the beginning.]

20 years ago today, the new medium of the web got a serious dose of “new media” with the launch of Wired magazine’s online sibling, HotWired, and its then-innovative monetization mechanism, the banner ad. Of course, much has been written about the birth of the banner ad, due to the remarkable impact and longevity of the format. (For example, here’s an AdAge piece on the 15th anniversary and AdWeek on the 20th.) Below are two of the original 12 banner ads: 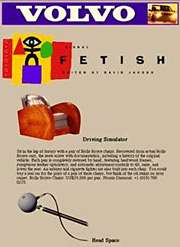 The cheeky “Have you ever clicked your mouse right here?” one at top is from AT&T. Other big brands in on this online “first” included Sprint, IBM, Club Med, and the then new (and not yet totally reviled) wine cooler alternative, Zima. You can see the full list of banner first-adopters in Andrew Anker’s answer in this Quora thread. (Andrew was HotWired’s CEO and co-founder.)

An interesting challenge faced by the pioneers of digital advertising was that few (if any) of HotWired’s first 12 clients actually had a website ready to direct consumer traffic to! So what happened if people clicked on one of these puppies? And click they did! Reports vary, but on the first days of the site going live, the click-through rate on the banners was as high as 78%, (though within weeks or months they would drop to 2%1). The answer: they went to a branded microsite, hosted on HotWired.com. That way, HotWired could assure a smooth user experience. Those microsites were built by Organic Online, the very first digital ad agency, which was in the same building in South Park as the HotWired team.

But enough about banner ads. (In more ways than one; I can hardly believe they still exist!) Instead, I’d like to take this historic anniversary day to pay homage to a different “first digital ad” that also debuted 20 years ago on HotWired: the web’s first “site sponsorship”…

While the first banners adorned the various secondary pages of the site, the home page actually was banner-free:

But it wasn’t ad-free. Though not captured by this old screen-grab (credit: web UX pioneer Jakob Nielsen), there was a very prominent ad unit at bottom of the page, right in the center, which made it clear that this site was running on the sexiest computer hardware around — Silicon Graphics (SGI).

I’d like to claim credit for coming up with the deal behind this other first digital ad. After all, I was leading the charge to explore the web as a possible new market for the company. And I had first heard the term “web server” nine months earlier from none other than Jonathan Steuer, the information architect for what would become HotWired. (He was intent on using Indys for the web server from the very beginning of the project2.)

No, the credit for negotiating the web’s first site sponsorship deal goes to Sanford Russell (also on the Indy marketing team at SGI) and Andrew Anker. The details are a bit murky in our collective memory, but the best I’ve pieced together is that we traded five beefed up configurations of Indy in exchange for a six-month exclusive sponsorship. The retail value of those machines was probably $40,000 to $50,000 (and the cost to us, given our high margins at the time, was probably about half that.)

My fondest and most vivid memory is what happened between when the ink on the deal dried and when HotWired launched, a period in which we needed to figure out what we wanted the sponsorship ad unit to look like or say. I called a brainstorm session with Sanford, Pat Tickle, and a few other Indy marketing colleagues. A bunch of ideas went up on the white board, but I came up with the winner. Actually, in truth, I stole the winning idea from a different domain of SGI marketing.

A few months earlier, I had attended my first SIGGRAPH, down in Orlando, Florida. In that era, SGI was so dominant that our relationship to SIGGRAPH was almost like Apple’s relationship with MacWorld. Our “booth” was freakin’ enormous, so big, in fact, that it bore the name “Silicon City” on signage towering over its four huge entrances. Below that, it said “Powered by Silicon Graphics”. And that was the magic phrase I was searching for! Once that bubbled up in my mind, I was sure we had the winner. The brainstorm ended as soon as I spoke it aloud.

I’ve searched and searched and not found a screenshot of the full home page of HotWired at its launch. But I have found one from a few months later, where the “Powered by Silicon Graphics” ad unit is highly prominent (and clearly clickable): 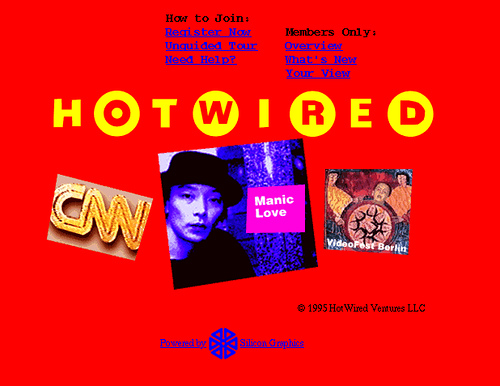 So, there you have it — the previously untold story of the web’s other first ad unit. The “Powered by Silicon Graphics” campaign with HotWired was a big hit, giving us instant cachet and credibility in the nascent web server market (even before we had agreed upon a strategy). In the months that followed, we would do similar deals (although for considerably less hardware) with several other high profile websites, including the Internet Underground Music Archive, Organic Online, and Rolling Stone, creating the impression that we were the web server market leader even before we launched our web server product line. Within months, sites even started putting “Powered by Silicon Graphics” on their home page without us giving them anything at all! Eventually, the term “powered by” became the de facto standard for site sponsorship deals. But how all of that would come to be is a story best saved for a future post.

[Update: The folks at Wired now have a nice telling of the creation of HotWired up.]