Virtual Reality: Then and Now

[Note: Though this post touches on events in the ’90’s, it is not part of my ongoing “20 Years Ago” series. I’ll return to that in due time, but, given how hot virtual reality has become (again), I felt compelled to interrupt my narrative to share some personal experiences and thoughts on the topic.]

I am honored to have recently had the chance to experience the second-generation Oculus Rift, the magical hardware/software combo that inspired first an Andreessen Horowitz Series B and then, within four months , a $2 billion acquisition by Facebook. As you can imagine, it was truly awesome. My deeply personal reaction can be summed up in four words, “Finally, it is here.”

You see, I got inspired by the concept of virtual reality nearly 25 years ago, when in 1990, the Wall Street Journal ran a piece on the technology, featuring Jaron Lanier, the dreadlocked visionary who coined the term “virtual reality” and who created the first VR startup, VPL. The article’s headline characterized the technology as no less than “electronic LSD,” giving virtual reality a forceful send off into Phase One of the hype cycle.

Less than a year later, when I arrived in Silicon Valley to go to Stanford Business School, I made getting over to VPL my top priority. Within weeks, I had successfully tapped my fledgling network to arrange a visit to VPL for me and a few classmates, hosted by George Zachary, VPL’s marketing director (and future colleague of mine at Silicon Graphics, who would go on to great success in the venture capital business at CRV). We got to put on the hardware (headgear and glove) and become among the first humans to explore immersion in an interactive virtual reality. I brought along my 35mm film camera and had someone take these pictures of me experiencing the demo. (That’s half of George on the right in the first image below.) 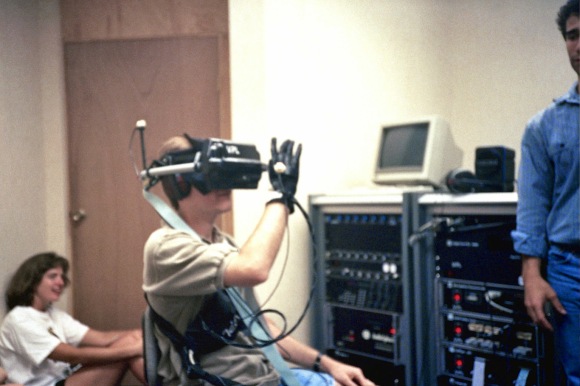 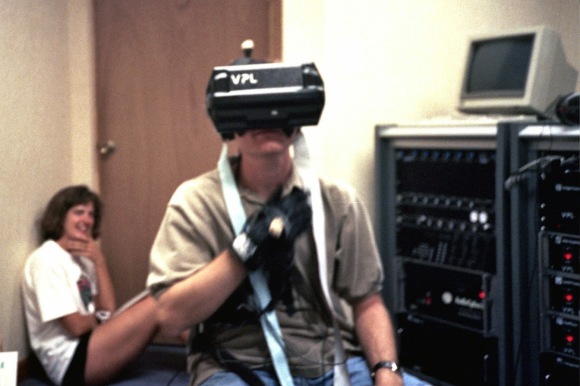 I remember being very excited by the experience. It helped ignite a passion for interactive 3D content that would become a major theme of my Silicon Valley career (from Silicon Graphics hardware, to trying to bring 3D to the web via VRML, and all the way to my current venture, MediaSpike, focused on the biggest 3D market so far, mobile gaming). But, in hindsight, VPL was a classic false start: a concept pursued before its time, and a company that would end in bankruptcy. VPL was not just a few years too early; it was decades before its time. That first encounter of mine with a VR headset was 23 years ago, and Oculus Rift DK2, as exciting as it is, is currently just a prototype of a developer release. The consumer version is not expected to ship until sometime next year. We are only just now truly on the cusp.

So, what did I see and experience through the VPL rig? Honestly, I don’t remember the details, just the hints of magic. Fortunately, I took a photo of a TV monitor during one of the other demos that day. Here’s what we saw: 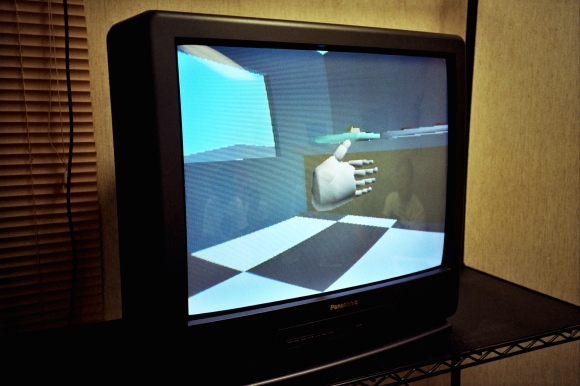 And, yes, somehow, I walked away from that demo more confident that virtual reality had a bright future…

Fast forward to a few weeks ago, to the Silicon Valley Virtual Reality conference at the Computer History Museum in Mountain View. I had been fortunate enough to learn of the event via a Facebook post from an old friend, Tony Parisi, co-creator of VRML, who would be speaking on a panel at the conference. I tried to register, but a sign of how hot virtual reality had become (again) — it was completely sold out! Fortunately, Tony was willing to ask a favor on my behalf, and, as a result, I was able to buy a pass for Day 2 of the event.

I greatly enjoyed the first session I got into, one on game development for VR. The members of the panel were unknown to me, but not to each other – or to the crowd. There were lots of, “Your stuff inspired me” kinds of comments, along with thoughtful discussion about: the special challenges of how to develop VR content; UI paradigms; and most-needed enhancements to the current generation of development tools.

But what I was really excited about was the upcoming break at the end of the panel. When it came, I quickly exited the room and headed straight for my primary target: the expo room and the Oculus Rift booth. I don’t know if it was my speed or that fact that it was the second day of the conference, but somehow I managed to get there before anyone else. Soon, I was seated in a comfy living room chair and told I’d be competing against the guy who arrived just after me. I slipped on the “DK2” (developer kit 2). One of the demo guys put headphones on me, and through them I was barely able to hear some rapid-fire instructions, involving a sword, a shield, jumping, and the various game controller features. Suddenly, a game controller was thrust into my hands. 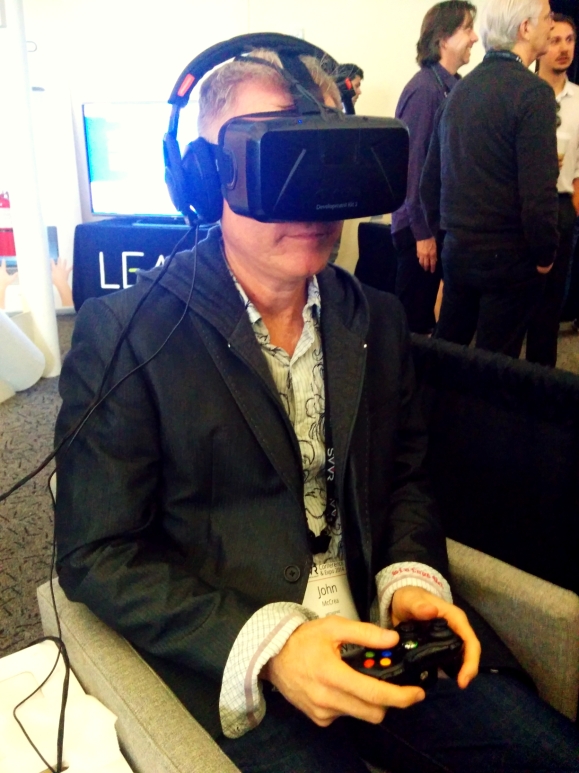 And then it happened. The world turned on, and I was in a virtual living room with a coffee table in front of me, atop which were two smallish 3D characters, each with a sword and a shield. My opponent sat in a chair to the right of the coffee table. I was temporarily overwhelmed with the joy of finally seeing true, high-quality VR, the compulsion to not suck at my virtual sword fight, and the strangeness of having my avatar controlling a virtual avatar. I smacked the various buttons, knocking my opponent off the table with my shield, and then knocking down a set of wooden blocks on the table with the swipe of my (my character’s?) sword. Within a minute, I was so engaged in the battle that I achieved full suspension of disbelief. I looked over at my opponent and saw his head move to; we were both exploring. I looked down at my hands, and saw (virtually) the controller in them. Then, my opponent upped the ante, and had his character change the target of its attack from my little character to me. His creature jumped in my lap and started swiping at me. And then, darkness. My heart was racing. 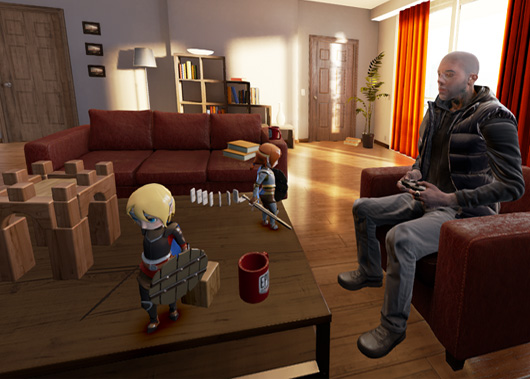 That, and many other experiences that day, convinced me that we are now, finally, on the cusp of the virtual reality going mainstream. I thoroughly enjoyed my experiences at the conference and felt like I had a sort of homecoming. After the panel that Tony was on, a conversation on “building the metaverse,” I planned to head out and go back to the office. As I was thanking Tony, he asked, “Did you see the Kite and Lightning demo?” I had not. “You have to,” he said. “These guys are making some of the best VR content ever.”

And so, I ended a great day with a truly mind-blowing encounter with immersive 3D content. You must experience it yourself when it is finalized and the Oculus Rift is available to all, but in the meantime, I recommend reading this description of it, then watching the YouTube video:

Of course, the real experience is far more visceral. But I am convinced the dream that has inspired so many of us for so long is finally about to be achieved.