Life as an “Explorer”

I’ve had the very good fortune of being part of the Explorer program for Google Glass for two weeks now. In an upcoming post, I’ll give a full review of the product, but for now I thought it would be interesting to share what it feels like to be among the earliest non-employee users of this revolutionary new platform.

First off, I’d say the Explorer program is a brilliant (and necessary) move. There’s no doubt that Glass is both revolutionary and controversial. Reactions to the product are all over the map, and it’s going to take society a while to get comfortable with this new generation of technology. So, having a small group of early adopters acting as ambassadors for the product makes a ton of sense. I’d also say that this is a program well suited to confident extroverts — and one that I imagine would be quite painful for all others.

Wearing Glass in public generates lots of reactions, ranging from stares, to audible murmurings (“Glass!” “He’s got Glass!”), to lots of unplanned conversations with complete strangers. Glass is a conversation starter with familiars, too, like the folks working the cash register at my local coffee shop and grocery store.

I’ve now discussed Glass with over 100 friends, family members, familiars, and strangers — and let more than 40 of them try the product. The reactions can be grouped into two buckets: fear and loathing; and curiosity and joy.

There are definitely some folks freaked out by Glass. Not so much by what it actually does and how I find myself using it, but by what they think it must do. These folks, mostly men and mostly over the age of 30, assume the device is constantly recording, or at the very least wearers of Glass are constantly and secretly snapping photos. Common reactions from this crowd are:

Conversations about Glass with those who have already formed a strong negative opinion tend to go poorly. I’m keen to help people understand how the product works, and what I like about it, in hopes of dispelling some of the misconceptions. So far, I don’t think I changed anyone’s mind. Oh, well.

Fortunately, even more people think Glass is a wonder to behold. These folks come in all ages and genders, but I’ve noticed a certain pattern; everyone under the age of 18 that I’ve discussed Glass with is very excited by the product.

Folks in the curiosity and joy camp tend ask a lot of questions, like:

Letting the curious try on my Glass is almost always a rewarding experience. At the grocery store a few days ago, a young man working there asked me a few questions. He had never heard of Glass and had no expectations of what it might do. I offered to let him try them on, but he said “no”. He asked another question, though, so I offered one more time. “Just for a second,” he said. And when he put them on, and saw a few events on my timeline, his face lit up with an enormous smile. “Oh, my God!” he said, and it sounded like he was having a religious experience.

Here’s someone in the curiosity and joy camp: 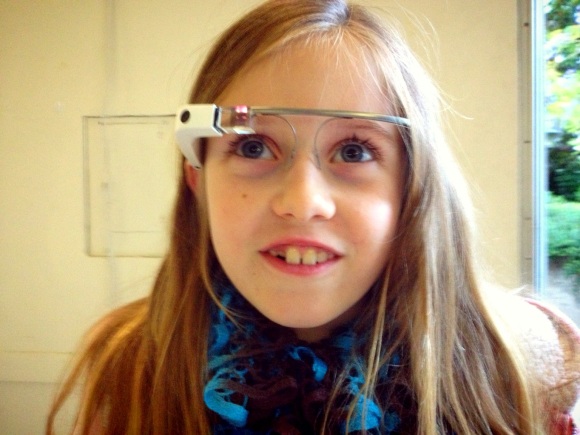 I will admit that part of the fun of the Explorer program, especially at this early stage, is that despite the freaked out minority, wearing Glass around Silicon Valley feels a bit like how I imagine it feels to be a celebrity. I’m noticed wherever I go, and strangers are keen to engage with me in really positive ways. Some have asked to get their picture taken with me. Curious.

There’s an interesting irony here: right now, in wearing Glass, I’m giving up some of my privacy, as I no longer blend into the crowd. But that seems only fair, given the privacy concerns of others about this new product.

Glass: the Most Important Product since the iPhone

Okay, so we’re some number of months away from the Google’s introduction of Glass to the world, and much has already been written, but I wanted to add my thoughts to the conversation. Why? Because so much of what I’ve read so far either leans toward skepticism or, while positive, takes a fairly narrow view of what I think will be a real game-changer. Let me outline why I believe that Google Glass will prove to be the most important product since the iPhone…

The iPhone put an always-connected computer in our pockets, giving us a new way to access and interact with the digital world. But as much as I love smartphones, there is something sad about our addictive fixation with their tiny, smudgy, bacteria-covered screens. Glass promises to be a great liberator, offering a new primary UI to so many things:

Together, I expect this new, way-more-accessible UI to drive an order-of-magnitude increase in my picture taking, video shooting, searching, map usage, and so on. Google will end up knowing way more about me — and, in return, deliver to me ever-more personalized and proactive services. And I am totally cool with that.

A new primary UI to your digital/online world is, of course, a pretty rare and extraordinary thing, but Glass is some much more than just an elegant UI layer. It is nothing less than a new generation of compute platform as transformative as the four generations that came before it: mainframe, mini, personal computer, and smartphone. Glass ushers in the era of wearable computing.

If Glass emerged from any of the other tech titans, there would be a question about whether or how much it would be “open.” But this is Google, so we can expect open-ness to be a central and defining feature of the platform. Expect a robust app economy to emerge — one that takes full advantage a new three-tier model: Glass + smartphone + cloud.

Actually, it’s even richer and more complicated than that. For Glass is but one type of wearable computer. Apple’s rumored to be working on an iWatch, and there are already several fitness tracking devices on the market. Over time, expect Glass apps to interconnect with an ever more diverse network of sensors on (or in) our bodies.

Just as the iPhone re-invented Apple, the introduction of Glass is re-defining moment for Google. What has been almost exclusively a software company will now become a consumer electronics company. I wish them much success in this big transition.

I got to test drive Glass this evening, out and about in downtown Palo Alto, and I stand by the title and substance of this blogpost more firmly than before. Three takeaways from the experience:

1) Huge convenience factor. While waiting to be seated at a crowded restaurant, I needed to know if there was a risk I’d be late to pick up my daughter. Instead of pulling out my iPhone, I just tilted my head up slightly and saw the time. Awesome! More importantly, my beloved iPhone, so central to my life, requires me to pull out my reading glasses. Glass? Not at all. I found the display remarkably crisp and easy to read without my reading glasses. And that was true, whether looking at a photo I had taken, a map, or the menu items. (Also, the speech interface works amazingly well in a noisy environment.)

2) Super comfortable. A lot of folks are worried that a computer on your face would be heavy and awkward. In my testing, Glass was as comfortable as my reading glasses or a pair of sunglasses. Very well designed, even though first generation. Imagine what Moore’s Law will do for this new product category.

3) “Glasshole” or rockstar? Many try to put Glass down for being awkward from the perspective of fashion and social comfort. I’ve thought for months that wouldn’t be a problem, and that, instead, the high-end price tag and great design would give the product a “luxury halo”. After experiencing the reaction in a pub and a restaurant, I’d have to say the skeptics will be eating crow. Wearing Glass in 2013 is awesome. Strangers come up and engage with you. People notice you enter the room. Friends ask lots of questions. It’s a bit like being a rockstar (at least in Palo Alto).