[20 Years Ago, Part 8. Other options: prior post or start at the beginning.]

It was Friday evening, and my big break was now just five days away. By Wednesday morning, I needed to be ready to present my Big Idea in front of the company’s COO, Tom “TJ” Jermoluk, and the exec staff. And I didn’t have even a first draft of a presentation!

Oh, and did I mention that it was 1994? I didn’t have access to PowerPoint; and there were only a few thousand websites total (so not a lot digital images available online).

Fortunately, my boss, Jim White, was a master of creating SGI-quality presentations, and he had recently shared his secrets with me. While the specific tactics will strike the modern reader as charmingly antiquated, the strategy behind them is as relevant today and remains at the core of my communications toolkit.

Before I share the system with you, I should explain that by “SGI-quality presentation” we would have meant a digital slide deck as boldly visual and differentiated as our smoking hot, colorful, media-monster 3D workstations.

Start with a Stack of Blank Paper

Don’t think about what will go on your title slide or the headline of slide number one. In fact, don’t worry at all about sequence when you’re just getting started. Instead, just focus on the key concepts that you need to convey in order to get your audience to believe what you want them to believe. Write each concept on its own sheet of paper.

Spread the Sheets Out

Now, it’s time to think about order. Use a long table or an open area of floor space to layout the sheets of paper. Start re-arranging them and keep at it until you have an end-to-end flow that feels right.

Once you know your narrative arc, it’s time to find an awesome image to illustrate each key concept. This image will fill most, if not all, of the slide. In fact, each slide will be nothing more than a big image, a one-line headline, and, perhaps, a sub-head or caption; no bullets. This was truly a “visual computing” approach to making a slide deck.

Today, it’s trivially easy to find great images online, but back in 1994, we needed other tricks up our sleeve, such as…

Bring Out Your Box of Magazines

Yes, a box filled with National Geographics, Times, Newsweeks, and so on. Once you know your storyline, just start flipping through your stash of magazines. Keep an eye out for high-impact images that make you smile or laugh. When you find one, see if you can logically tie it to any of your key concepts. If so, yank out the page and set it aside.

Here’s an example image (from National Geographic) that I ended up using a few months later, but I’ll tell you more about that when the time is right: 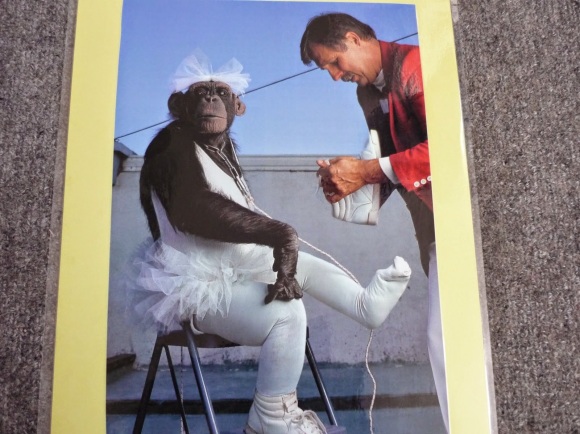 Head to the Scanner

With your stack of eye-popping, emotionally-charged photos, head on over to the scanner and turn them into digital files. If I recall correctly, this took a while and was kind of a pain. I think the files ended up on a network drive, and we had to use Unix commands to find and move the files over to our own workstations. Nonetheless, the process worked, providing high-quality color images that looked great even when projected on a large screen.

Although PowerPoint had been around since the late ’80’s, we did not have access to it for two inter-related reasons. First, it ran only on PCs and Macs, not Unix systems. Second, SGI had gotten rid of all PCs an Macs; the company ran its entire business only on SGI hardware. And so, if you were going to make an SGI-quality presentation, you were going to make it with our very own, SGI-made presentation tool, “Showcase”.

Showcase was a very powerful tool, with better media and graphics features than PowerPoint at the time. You could compose slides by dragging-and-dropping images, audio, and video. It even allowed for creation and editing of 3D objects, scenes, and text. (Not too surprising, since it was built to literally “showcase” the differentiation of our 3D workstations.) Here’s the “3D Gizmo” UI with, among other features, material and texture palettes:

I have to say, these old screenshots still look pretty damn good!

But for all of Showcase’s strengths, it was also more than a little bit buggy, and prone to freezing or crashing in the middle of editing. Frequent saving was a critical part of any successful project. For all of these reasons, marketers at SGI often lovingly referred to this vital tool as “Slowcase”.

So, that’s how SGI-quality presentations got made 20 years ago — and a taste of what I was in for over the weekend and into the early part of the coming week.

4 thoughts on “Making an “SGI-Quality” Presentation”