To Serve: How WebFORCE got its Netscape server software

[20 Years Ago, Part 13. Other options: prior post or start at the beginning.]

Having found a fortunate and just-in-time path forward on the authoring side of the WebFORCE1 project, it was time to focus on delivering the simpler, but equally vital, other half of the value proposition: web serving.

The approach seemed straightforward; instead of building our own software, like we were for authoring, for serving we would take the partnership route. We just needed to secure an OEM license with Netscape to bundle their recently released NetSite server software. But nailing down that “simple” deal would prove to be more difficult than I imagined for two reasons, one that was known to me at the time, and another that I would only figure out much later…

The complicating factor I was aware of was that in December 1994, SGI was already in the middle of a different OEM deal with Netscape. You see, our customer support team had more fully embraced the web than any other computer company at the time (and, arguably, more than any other company period), having launched a customer-facing portal called “Silicon Surf” in March of that year. Believe it or not, you can still interact with a live version of Silicon Surf from that period, thanks to the work of Daniel Rich, SGI’s “webmaster” back in ’94, who resurrected the site many years later from a promotional CD-ROM. (Yes, back then it actually made sense to distribute a website on a disk in order to get people excited to go online!)

By the way, when finding the screenshot of Silicon Surf below, I recently learned that it was the launch of SGI’s website that got the competitive juices flowing over at our rival, Sun Microsystems, leading to them to create the Sun.com website! 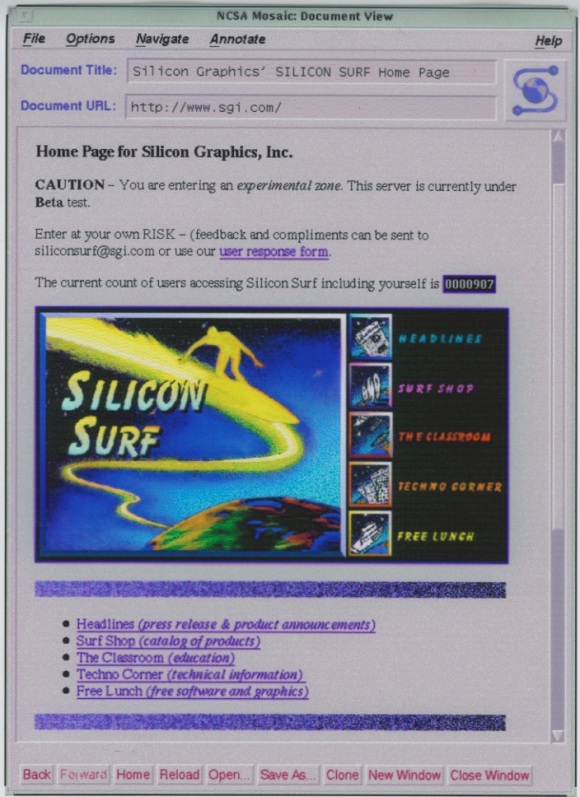 In the Fall of 1994, the team behind Silicon Surf, led by Kip Parent, had decided to do another thing no computer company had yet done – pre-install a web browser on every desktop, in order to make the web central to the support experience. So when I stepped in to negotiate on behalf of the WebFORCE effort, a single and simple OEM deal for the browser morphed into a two-part deal, with browsers for all SGI workstations and server software just for WebFORCE-branded configurations of workstations and servers.

Despite that complication, I was still expecting a quick and easy negotiation. After all, having the hottest company in Silicon Valley throw its weight aggressively behind the web, in general, and behind Netscape’s server and browser, in particular, would be a big win for Netscape. And given that our two companies were both founded by Jim Clark and that SGI was Netscape’s primary development and serving platform at the time, we seemed the most natural of partners. Why, we were practically family!

So, why shouldn’t we be able to put this deal together in just a few weeks? (And a few weeks was, indeed, all that I had.) The launch date was locked in: January 25. That meant I needed to close the Netscape deal by the end of December, or at the very least, the first week of January, in order to nail down all of the marketing materials.

My counterpart in the negotiation was Marc Matoza, who had recently joined Netscape as their first sales rep. I had naively assumed we would do a quick and friendly deal. In reality, the tone was far from “familial”. Making matters worse, Marc did not seem to share my sense of urgency. Quite the contrary, he seemed to view my deadline focus as a source of negotiating leverage. As the holidays approached, I knew I needed to take a different path.

In the technology business, it’s hard to understate the importance of right timing. I was truly fortunate not just to get into Stanford business school, but also to time it just right as a member of the class of ’93. As a result, I ended up riding out the recession in school and then entering Silicon Valley just as the web wave was beginning to swell. Many of the friendships I made at the GSB (in my class and in the class of ’94) formed the basis of an incredible network, touching almost every part of the emerging web industry. And one of those relationships in particular would come to play a pivotal role in getting me out of my negotiation quagmire.

There’s the people you know from classrooms and the people you know from parties. And then there’s people you know from playing hockey (or other sports). My fondest memories of Greg Sands, GSB class of ’94, are of getting schooled by him in how to translate my decent ice skating skills into playing rollerblade hockey. Even in a friendly game, hockey is pretty physical, but you don’t really want to check your business school buddies and send them tumbling to the blacktop. But Greg is a really great skater, having played on Harvard’s ice hockey team as an undergrad. So, I felt comfortable skating aggressively around him, even lightly checking him, knowing that it was way more likely that I would end up flat on my back than that he would. In short, we ended up getting to know, like, and really trust each other.

In Greg’s second year of business school, he spotted an interesting posting at the career center. Someone from the Stanford community was looking for a business school student to do some volunteer work on a startup business plan. The poster was none other than former electrical engineering professor Jim Clark, and the startup at that time was just Jim, Marc Andreessen, and the earliest seeds of what would eventually become Netscape. From that auspicious beginning, Greg would go on to become the company’s first business/marketing/product hire, coauthor of the business plan, and the person who gave the company its new name, Netscape, after the University of Illinois threatened to sue over the use of “Mosaic”. And now, he was the product manager of the very software products I so keenly wanted to license… 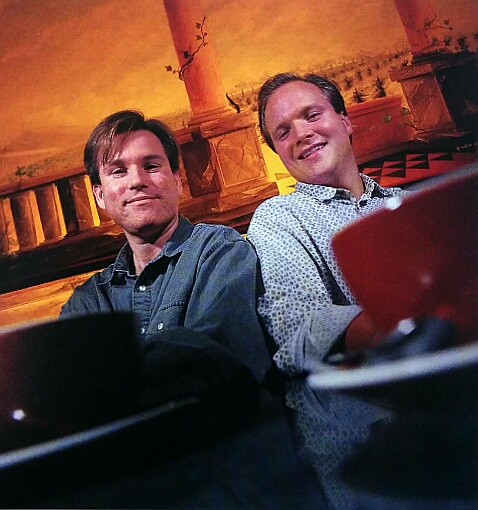 [Above: Greg and I in Stanford Business School Magazine, December 1995. Pretty clear we weren’t getting a lot of sleep that year!]

Greg and I met for coffee at Café Verona2 in downtown Palo Alto to talk it out. We didn’t do any actual negotiation. I shared my frustrations and my goals. And perhaps most important of all, I shared with Greg my “BATNA”. (That’s a term we both would have learned at the GSB in the negotiations class. It stands for “best alternative to a negotiated agreement”.) Although I was truly keen to bundle Netscape’s server software with WebFORCE, if for some reason we were unable to finalize a deal in time, I could live without it. In that case, we would emphasize our Web Magic authoring software and position the product line as Netscape-ready or add-your-own-server-software. This wasn’t a threat or posturing; I was just candidly sharing my situation.

Greg offered to see what he could do. Within days he broke the log jam. Terms became reasonable and the timeline radically accelerated. I ended up getting my deal well in advance of the holidays, and SGI became the second OEM licensee of Netscape. (The first OEM deal, struck a month earlier, was with Digital Equipment Corporation. That said, we would beat them to market, becoming the very first vendor of a turnkey web server.)

But what was it that had been the real friction? I didn’t ask, and Greg didn’t tell. But over time, I would come to understand that it wasn’t Marc Matoza dragging his feet. The real issue was Jim Clark, behind the scenes, who was still bitter about having been edged out3 of his own company. In my research for this blogpost, Greg recently shared with me that the WebFORCE deal “caused a bit of a firestorm internally, as Jim didn’t want SGI to get a special (and OEM prices always feel like specials).”

1Though we had pitched the project to TJ as “Spider,” that was never really intended as the launch name. About two weeks after funding, I came up with the real name and tagline in the shower before work: “WebFORCE: To Author and To Serve”.

2It is now long since closed, but Caffe Verona played a role in Silicon Valley history – it was where Marc Andreessen first met Jim Clark.

3Jim resigned as Chairman of SGI, but only after years of strategic disagreement with our CEO, Ed McCracken, and a rising sense of being shut out of key decisions.